Is Japan Too Innocent? 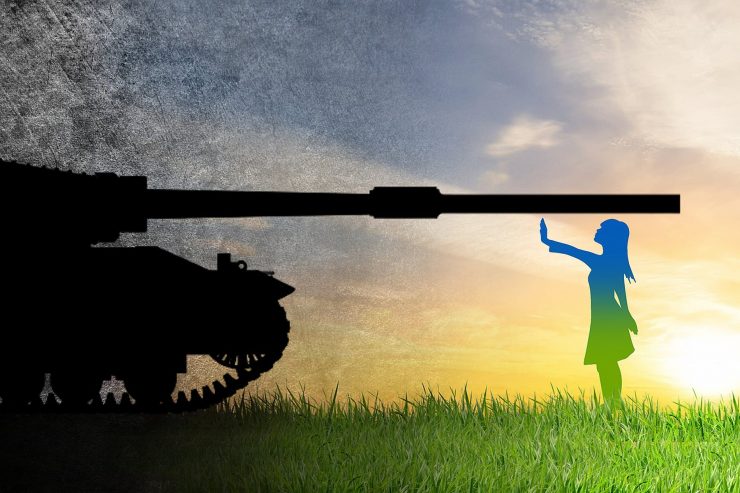 Earlier this month, my wife and I decided to watch “Best Artist 2022,” a music special broadcast on Nippon TV (日テレ). It was presumably a compilation of the year’s best songs, but you know kids these days and their music. Anyway, we let it run in the background, but our ears perked up when they announced a special song in support of Ukraine.

The ditty was named Hana wa dare no mono? (花は誰のもの？, “Who Owns the Flowers?”), performed by STU48, one of those all-girl groups with something like 46, maybe 47 singers in all. One fan was kind enough to post that portion of the show on YouTube. The first three minutes of the following video contains their performance from the December 3 broadcast.

(If that video gets taken down for any reason, the official version of the song from earlier in 2022 can be found at this link.)

The song, written in the wake of Russia’s February 2022 invasion of Ukraine, begins with these words.

If national borders disappeared from the world

There would be no more fighting…

Throughout the song, idols clad in frilly maid costumes reminded viewers that if sunshine and flowers reach the entire world without worrying about who owns them, why oh why can’t the same be true for the lands where those flowers and sunbeams live? As they crooned their poetry in unison, scenes of destroyed Ukrainian cities appeared in the background, intermixed with images of verdant hills and children dancing. I half expected to see a cat chasing a laser pointer.

The incongruity between glimpses of war from Eastern Europe and a troupe of cosplaying twentysomethings miming flower petals with their hands was nauseating. I understand the optimism of youth, and I’m glad that they prefer peace to war, but you would hope that some responsible adult had reminded them that flower power doesn’t work when a bloodthirsty aggressor is intent on destroying his enemies.

Japan, of course, is not ignorant of the realities of war. Given the local destruction that came at the end of World War II, it’s not surprising that as a nation, Japan inclines toward peace. Article 9 of its post-war constitution even codifies this sentiment: “The Japanese people forever renounce war as a sovereign right of the nation and the threat or use of force as means of settling international disputes.” But STU48’s mushy, saccharine call to just giving peace a chance ignores cold truths about human nature.

It’s possible that Japan’s post-war experiences have separated the younger generation from the lessons of global conflict. Technological advancement coupled with the affluence of a rising middle class always seems to lead to social fantasies. We see it in the United States, where an entire generation that grew up without knowing want or war now begs for safe spaces and guaranteed incomes. They even delude themselves into thinking that firing all cops will bring an end to crime and imprisonment.

The peace divided took a somewhat different form among Japan’s youth. The sense of entitlement found in their western peers is absent here. In its place is a sweet innocence that at times defies explanation. Not that Japan is a perfect paradise. The nation is constantly battling one major problem after another, be it earthquakes or North Korean missiles or high suicide rates or nuclear meltdowns or an aging, dwindling population or a never-ending economic malaise.

If that music program is any indication, the response to such life-impacting trauma is to exclaim shikataganai (“It can’t be helped”), dress up in a lacy miniskirt, and prattle on about sunflowers and moonbeams. It frankly boggles the mind, especially since Japan has shown itself to be one of the most innovative, indefatigable, and phoenixlike countries on earth. They completely transformed themselves not just once, but twice in the past 150 years, each time rising to one of the top places on the world stage, and deservedly so. And yet, there’s those dancing maids.

I refuse to believe that Japan has become infantilized to the point where it thinks soft things like puppy dogs and marshmallows can cure the world’s woes. But all nations, no matter how powerful, are always at risk of slipping into pointlessness. If Japan wishes to retain its position of influence and vision among the nations, its fortitude must be more visible to the world than its kawaii innocence.

Japan already has a solid foundation on which to project its message with boldness and clarity. That quote above from Article 9, the one renouncing war, includes a vital prefix: “Aspiring sincerely to an international peace based on justice and order….” Japan officially recognizes that any solution for international conflict must be based on justice and recognized order, and not on dozens of kids chanting in unison about peace. Some of the innocents among us may yearn for a day when there are no borders between countries. But if Japan allows legion of singing idols to be its mouthpiece, other saber-rattling nations in this part of Asia may someday decide on their own to help remove Japan’s borders.