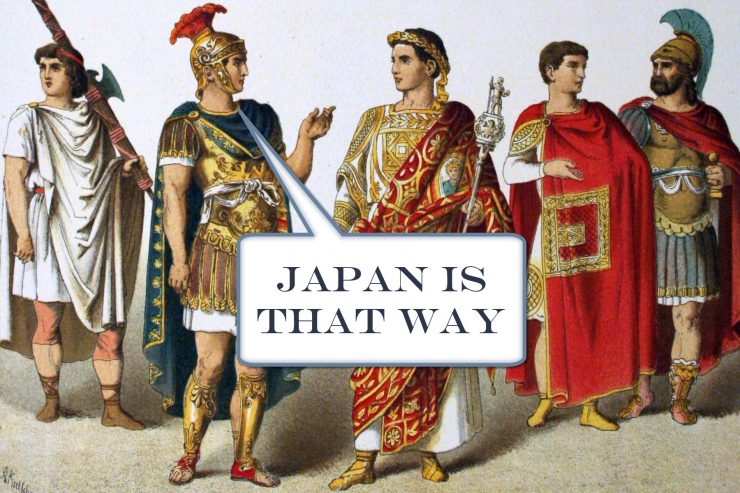 This past Sunday, I visited an English-language church in Tokyo. After the main service, they had an adult Sunday school class where the teacher spoke in part about the First Jewish-Roman War. Starting in 66AD, near the end of Emperor Nero’s reign, the conflict saw the destruction of the Jewish temple in Jerusalem by the Roman army. I remember as a youth watching the television miniseries Masada, which depicted one of the final battles in this seven-year war.

The class was conducted in English but included a mix of native Japanese speakers as well as immigrants and visitors from various nations. One attendee, a Japanese woman in her seventies whom I’ll call Sachiko, asked the following question: “Who are these Romans and what were they doing in the Middle East back then?” I was taken aback. While it wouldn’t surprise me that the average Japanese—or the average American for that matter—might not know about Masada or the details of Rome’s battles in the Palestinian region two thousand years ago, surely everyone has heard of the Roman Empire. The Greeks and the Romans; these are two of the most important civilizations in world history.

At least that is how the story goes in the American educational system, founded as it is on Western Civilization and the Enlightenment. I can still recall lessons from my own high school world history class that covered the Greek philosophers, the Trojan War, Columbus sailing the ocean blue in 1492, Teddy Roosevelt’s Rough Riders galloping up San Juan Hill, and other noted events in Europe and the Americas. Now that I think about it, we didn’t cover too many details about Japan, China, or Korea. I do remember about fireworks and paper being invented in China. We also studied the twentieth century portion of Japan’s history. I don’t recall Korea and Southeast Asia coming up at all until we had already passed World War II.

I wonder if that is the story with Sachiko. She struck me as someone who was generally well educated, so I’m sure that she must have encountered the Roman Empire in her studies at some point. But growing up as she did in Japan, I expect that the events surrounding the death of Oda Nobunaga were studied in more detail than the philosophical conflicts that led to the death of Socrates.

If I am honest, I have to say that I was perhaps too impressed with myself for knowing about the Pax Romana. And if I take this sudden bout of honesty even further, I have to admit that I don’t really know that much about the Roman era at all. Sure, I can still see in my mind photos of the Appian Way and various aqueducts that my teachers showed on the overhead projector. And I saw the classic Charlton Heston epic Ben Hur, so there’s that. But if you asked me to write a short essay on the major impacts that Ancient Rome had on us today, I would struggle to write much of value.

The contributions of Rome and Greece to world history are significant, and any well-rounded education should include some coverage of those empires. But when you move to Japan and find yourself surrounded by castles and ancient stone walls in the heart of the city, or inundated with local historical TV dramas covering some of the most tumultuous events in the last two thousand years, you realized that it’s not all about Rome. Or England. Or America.

Upon further reflection, I think that Sachiko’s question was perhaps one of the most important ones asked in that class.

[Image Credits: Costumes of All Nations, by Albert Kretschmer and Dr. Carl Rohrbach, in the public domain]