Figuring Out Stoplights in Japan 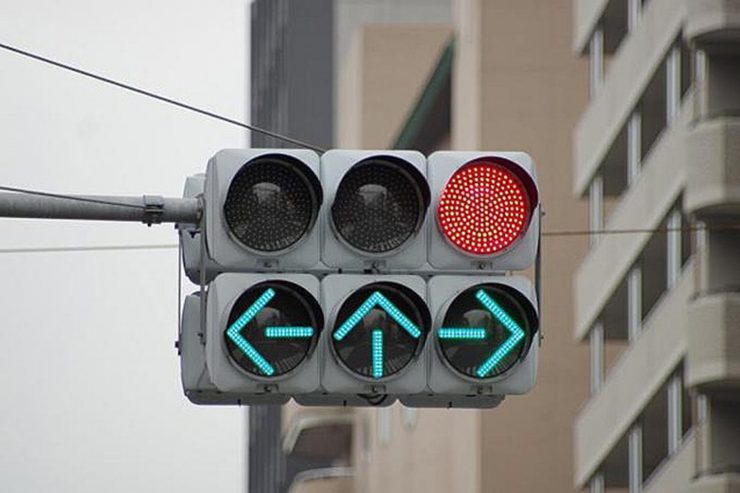 I’ve always found traffic lights in America to be pretty easy to understand. The solid red light means stop, the solid green means go, and the solid yellow means go real fast, there’s still time. (You should check that last one in the driver’s handbook just to be sure.) Once in a while, you will see a red, yellow, or green arrow, especially for left-turn lanes that have their own delayed schedules. Perhaps there is some oddball light system in Minot, North Dakota, that I’m not aware of, but generally those are the standard options.

In theory, those are also the only options available in Japan. But for reasons that may have to do with ancient tea ceremony rituals, stoplights in Japan include every possible combination of those solid and arrow lights, displayed in ways that make you question whether the government was correct in issuing you or the traffic engineer a license.

From what I can tell, the problem with lies with how you prioritize solid lights and arrow lights. In America, if there is a solid light and an arrow light—such as a green solid ball and a red left-pointing arrow—your thinking process goes like this: “Everyone gets to go except for those turning left, who need to stop until they get a green arrow.” The priority is on the solid light. Any arrows represent supplementary information that you need to be aware of if you are going in that direction of travel. At least, that is how I learned it.

In Japan, stoplight logic seems to be built around placing any arrows first in priority. One of the most common combinations you will see here is a solid red light paired with the forward green arrow.

This image almost conveys the same core information as the American version before it. If you are in the main forward-moving flow of traffic, you have a green light that means “go.” If you are making a cross-traffic turn (like the left turn in the US, but it’s a right turn in Japan), you have to stop. But there’s also a good chance that you are supposed to stop if you are turning in the other direction (left in Japan) as well. Whereas the American version of this pairing says, “everyone goes except those turning left,” the Japanese version says, “the forward direction of traffic goes, but everyone else stops.” The priority here is on those arrows that appear. If you aren’t being directed by one of the displayed arrows, you are covered by the catch-all solid light.

If you don’t believe me, consider the instructions provided by the Japan Automobile Federation, or JAF. In their guidance for a solid red light paired with a green arrow, they say, “Vehicles may proceed in the direction indicated by the arrow even if the signal light is yellow or red.” Their instructions prioritize the arrow’s information above the more general solid light information.

Perhaps it is a linguistic difference only, but when you first encounter Japanese stoplights, it really is confusing. And it’s not just me. I have seen Japanese drivers slam on their brakes for the above red-solid, green-arrow combination, even though they were free to move forward.

You also have to keep in mind that these primary instructions only apply to standard vehicles. If you are driving a moped or one of the smaller “kei” lightweight cars, the rules are different for you. In those same JAF instructions I quoted above, you find this additional guidance: “However, in the case of a signal arrow indicating a right turn, lightweight vehicles and mopeds making a two-step right turn may not proceed.” I am so glad I don’t drive a moped because I don’t actually know what that sentence means.

On top of all this, there is the added confusion that at some intersections, whenever any of the lights (solid or arrow) turn yellow, all other displayed lights momentarily turn off. In the case of that red-solid, green-arrow pair above, when the green arrow turns yellow, the previously displayed red and green indicators both shut off, leaving only the yellow light for everyone to interpret.

If you plan to drive in Japan, make sure you pick up a copy of JAF’s Rules of the Road, which provides information on correctly translating stoplights and more. But as we saw above, sometimes even those official instructions don’t cut it. As someone who owns a car in Japan and has driven in various settings across the nation, both rural and urban, let me offer you the following helpful advice: If you want to safely navigate stoplights in Japan, consider buying a train pass.