How Fast is that Japanese Train? 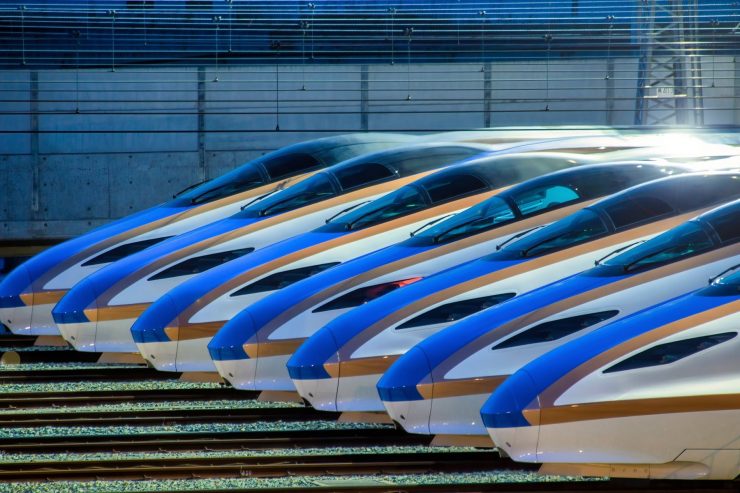 The other day, I ran to the platform and jumped on a departing train only to find out that it was an express that would bypass my target station. My goal was to board an express, as my destination was a distant but largish station normally serviced by the faster trains. But it turns out that there are many kinds of express trains that vary in how many stations they serve, including the really-express that I boarded by mistake.

Japan Rail (JR) and the other major train companies provide a variety of regular and express services. Unfortunately, they use a jumble of names and speeds for these services that don’t necessarily carry from one system to the other. But there are a few patterns, and I will try to list them out in order from slowest to fastest.

Before I give you the express tour through these names, a quick word about the general terms for trains.

If you are not in any particular hurry, you will use one of the futsū-ressha (普通列車, often shortened to futsū/普通) “regular” train lines. They are slower than express trains, due to the large number of stops they make at stations. These trains usually only require a basic jyōsha-ken (乗車券) ticket to ride.

The most basic regular train is the kakueki teisha (各駅停車), known in English as the “local” train. The Japanese name literally means that these trains will stop at every station. Some riders call them donko (鈍行), the “slow train.” If you need to access a remote or seldom-used station, you probably need such a slow train.

The next step up in speed also comes with an increase in names, which vary by vendor and the purpose of the train line. In all cases, these “semi-rapid” trains omit some stations normally accessed by local trains, either by skipping some in the middle, or limiting the end sections of the local line. But they are all essentially a slight step up in speed from the local train.

The next speed level is the “rapid service” train, known as kaisoku-ressha (快速列車). Its name is similar to some of the other kaisoku options shown just above, but in theory it is faster. This service type removes even more stops, but still hits all of the big stations and multi-line junctions, plus lesser stations that have lots of passengers.

The next fastest is the Tokubetsu-kaisoku (特別快速), the “special rapid” service. Some companies name this the shin-kaisoku (新快速) or “new rapid” service. Use this when those un-special trains aren’t fast enough.

The tsūkin-kaisoku (通勤快速) service is next, know in English as a “rapid commuter train.” Such trains bunch the stations they serve at the start and end of the line, sometimes skipping major blocks of stations in the middle of the local line. This allows those commuting to and from work from afar to go into and out of downtown faster.

The chokutsū-kaisoku (直通快速) train is a “direct/thru service” option that is designed to serve the starting and ending points with few or no stops in between. Such trains might be abbreviated as chokutsū (直通) or chokkō (直行).

The final option is the horidei-kaosoku (ホリデー快速), the “holiday service” that, as the name implies, only runs on special days. Such trains might make a combination of stops not normally available on other days.

Despite the ordering of trains shown above, you will find variations among the different companies. For instance, I just read an article about the Tsukuba Express, run by a private railway within Tokyo. Its “rapid” service is faster than its “commuter rapid” service, even though the list above show the opposite. When in doubt, count the number of stations in each run.

Express trains often come with a secondary ticket charge, at least on JR-managed routes. The general term for these faster trains is kyūkō-ressha (急行列車), shortened to kyūkō (急行). They will also be faster than a local line, but how much faster depends on the variety of express.

The slowest express train is the futsū-kyūkō-ressha (普通急行列車), the “ordinary express” train. When you see the 急行 abbreviation, it typically refers to these all-express-stations trains.

If you want to go a bit faster, look for the kōsoku (高速) “high speed” express trains. You won’t see these on JR lines, but within other private lines they allow you to skip some standard express stations.

Next up is the tokubetsu-kyūkō-ressha (特別急行列車), known as a “special express” or “limited express” train. These trains tend to skip a lot of stations. Within the JR system, this is the fastest option for standard-configuration lines. When looking for this type of train on signs, search for the tokkyū (特急) abbreviation.

Some private lines offer an even faster sai-kyūkō (最急行) or saidai-kyūkō (最大急行) service, known as the “maximum express.” It sounds crazy-fast, but it will give you the same level of service as the 特急 from JR.

Finally, there are then shinkansen (新幹線), the world-famous “new trunk line” bullet trains, that get you from Point A to Point B in record time. While nowhere near as fast as a jetliner, they can sometimes be a faster option when you take airport security and the ride to and from the airport into account.