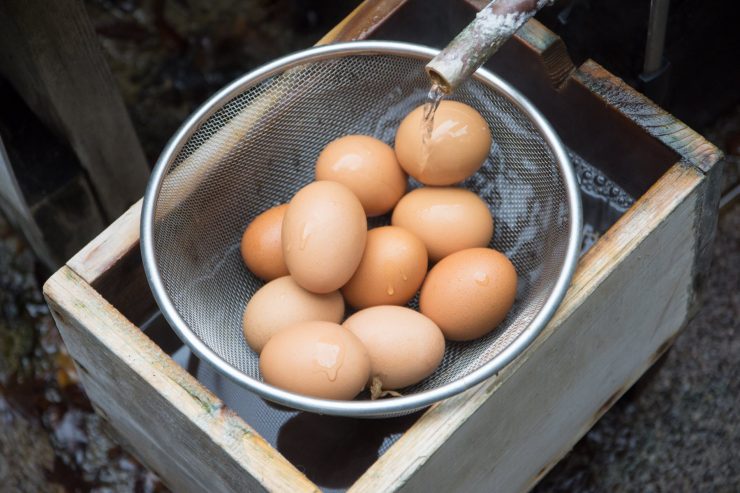 Sometimes on a lazy weekend morning, I venture out to my local Denny’s for breakfast. Mind you, this isn’t the American version of Denny’s. You won’t find oversized Grand Slam plates or umpteen ways of serving up fried potatoes. Instead, you have your pick of salads, light sandwiches, and my personal favorite, grilled salmon with a bowl of rice and an onsen tamago.

An onsen tamago (温泉卵) is an egg that has been cooked in its shell in hot, but not boiling, water. Slow cooking the egg at 70°C or above for up to thirty minutes results in an egg that is a bit runnier and creamier than a traditional soft-boiled egg. If you prepare such delights in the waters of a natural hot springs, you have a true onsen tamago. Using plain water gives you a “half-cooked” han-juku tamago, which is probably what Denny’s does—or what they used to do. A few weeks ago, they stopped offering han-juku eggs with breakfast!!! First the economic bubble bursts, and then Denny’s does this. What is happening to Japan?

While I can’t get my onsen tamago fix from Denny’s any longer, there are homemade options. Last year, I purchased a device that claimed to make such eggs in the microwave. It cost me ¥300 (just under $2) and it was everything you might expect from a ¥300 egg cooker. I moved on.

This time around, I opted for the Hoka Hoka Onsen Tamago Maker. A nice worker from Amazon—statistically, his name is probably Mr. Satō—delivered it to me for under ¥1,000, or around $9. Unlike that microwave fiasco, this product works! How does it work, you ask?

Essentially, the Hoka Hoka is an insulated plastic bin just large enough to hold two eggs. After gently lowering the eggs inside, you cover them with just-boiled water, then close the lid. Cooking times vary based on the number of eggs (one or two) and whether your eggs came right out of the fridge or not. If you start with one room-temperature egg, it will be ready in about nine minutes. For two frigid eggs, you will need to wait closer to half an hour.

Trust me, it will be worth the wait. On my first attempt, I cooked two tepid eggs. Eleven minutes later, I enjoyed a traditional tamago gohan snack by cracking one egg open on top of a bowl of rice, adding a dash of soy sauce, and mixing it lightly. The taste and consistency were exactly what I expected from onsen tamago. Thanks, Mr. Satō!

It turns out that the Hoka Hoka is not trying to make just half-cooked eggs, but true onsen tamago, like those available from the famous egg-cooking hot springs in Misasa, Tottori. The secret is radiation. According to the description on the Hoka Hoka box, the stand that you use to lower the eggs into the device contains ラジウム鉱石, that is, radium ore. If you remember your middle school science classes, radium is the stuff that Marie Curie played with. It’s generally nasty, which begs the question: Should I be eating these eggs?

I found an article that says not to worry, since the eggs are picking up alpha particle radiation similar to what comes out of topsoil, and not the more destructive ionizing radiation that comes out of nuclear power plants. Another article I found said that each time you suck in the helium from a helium balloon, you are likely ingesting a biproduct of uranium decay, so there’s that.

Given how obsessively safety conscious the Japanese government is about absolutely everything, I expect that I’ll be fine eating these homemade onsen tamago. That’s good to know, because of Denny’s isn’t going to do it, I’ll have to do it myself.