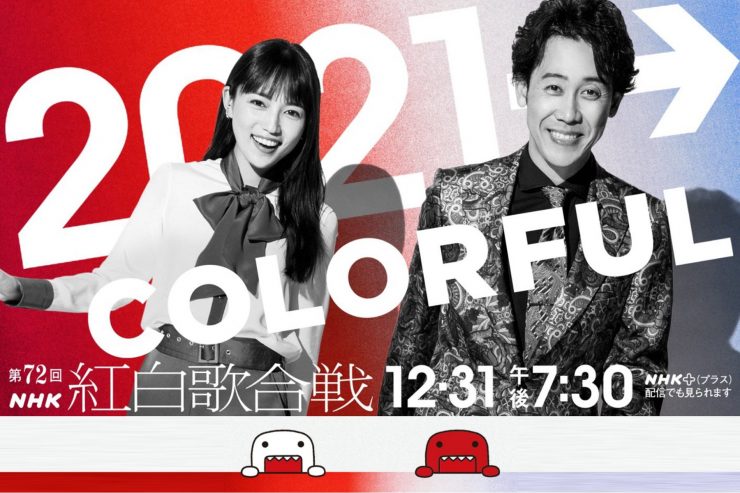 New Year’s Eve of 2021 marked the first time since the 1990s that I didn’t watch Kōhaku Uta Gassen, Japan’s televised year-end music extravaganza. If you are not familiar with the program, it is a celebration of the closing year through the medium of songs by the year’s most popular performers. Starting around dinner time, the show runs just over four hours, most of which is filled with dozens of songs, both traditional and modern. In between acts, male and female hosts—representing the “white” and “red” teams, respectively, in the show’s uta gassen (“music battle”) format—exchange witty banter with the musicians, with the panel of judges, and with each other.

Or at least that is how it used to be. The show had a decidedly different feel this year, although in truth, the change has been growing over the past several years. It didn’t help that there was an update in venue for the first time since 1972, as the standard NHK Hall location was undergoing earthquake-related retrofitting. There was also a change in the hosting duties this time around, with Ōizumi Yō replacing fellow comedian Uchimura Teruyoshi after the latter’s own four-year run. While Ōizumi is a talented funnyman, he lacks Uchimura’s ability to unify a multi-act stage show, a skill that Uchimura honed during his own decades-long variety show career.

The ongoing pandemic meant that, once again, the show went on without an in-house audience. The judges and special guests, normally organized in neat, compact rows, were strewn about the otherwise-empty seating area, giving the program a deserted feel. The acts, too, were dispersed, with some of the singers calling in their performances remotely, possibly on pre-recorded video. But the issues with the show are more endemic. The core problem seems to be tied to changing demographics within Japan, and NHK’s lackluster ability to either stick with a winning formula or adapt to those changes.

Kōhaku has long mixed traditional enka songs with the modern tunes that the young, hip kids like, and did so in a way that managed to appeal to all age ranges. But the appeal is no longer there. I’m not well-versed enough in music theory to know why that is. Perhaps it is the homogenization of radio-play music, where nothing much stands out anymore. It might be the overuse of 48-member all-girl singing teams. Or maybe it’s the program’s tendency to pull out the same songs over and over again. I’m a big fan of Ishikawa Sayuri, but her generation of crooners has more to offer than just another round of Tsugaru Kaikyō Furu Geshiki.

The show’s production team has tried to address changes in Japan and the broader interconnected world. This year’s theme, “Colorful,” is a clear attempt to respond to worldwide calls to downplay gender and racial differences within societies. A show with a gender divide right in the name—“kōhaku” means “red-white,” chromatic terms for the female and male contestants—is an obvious target for those who promote gender fluidity. Unfortunately, this year’s removal of competition at the host level (though not at the performer level) just made the show more boring rather than more relevant.

Instead of figuring out how to appeal to changing demographics, the program has chosen to replace spectacle with gimmicks. I miss those days when Mikawa Kenichi and Kobayashi Sachiko would one-up each other with costumes that filled the entire stage. Instead, I had to watch Miyama Hiroshi sing Ukiyo-gasa yet again while participants in numbered T-shirts attempted to break the world record for sequential ken-dama captures yet again. NHK, step away from the kid’s toy!

Even NHK president Maeda Terunobu seemed ready to admit defeat, with his statement to another TV exec that the annual music show might be on the chopping block. It might not be missed. For our part, my wife and I spent most of the evening watching a “five-hour special” version of TV Asahi’s normal Friday-night show Zawatsuku. I wasn’t the only one thinking this way, either. Even Japan’s primary English-language newspaper gave advance advice on what else to watch on ōmisoka (New Year’s Eve).

I would hate to see Kōhaku Uta Gassen disappear. I have looked forward to viewing it, or at least having it on in the background, every New Year’s Eve for decades. But just like the Oscars, NHK’s annual event may have outlived its purpose. With easy access to internet-enabled global social enclaves, citizens no longer seek out national unifying events like they did in the past, whether in America or Japan. Unless the program can recapture the essence of what is musically Japanese, and do so in a way that actually has cultural meaning for the nation’s viewers, it may be a lost gassen.