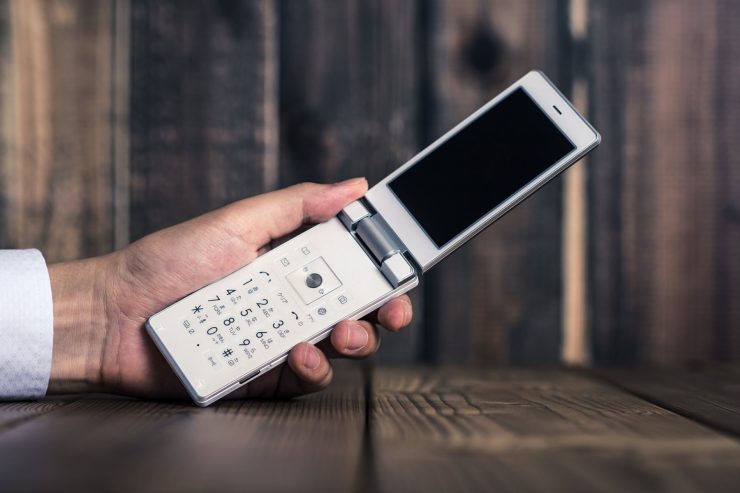 Despite being the odd foreigner, when I ride trains in the Tokyo metro area, nobody makes eye contact with me—or with anyone else—because they are all glued to their smartphones. Android and iOS devices are technological marvels, and it’s no wonder people want to peer into them, what with all they can do. And yet, there is a subset of the population—close to seven percent—that relies instead on a portable communications technology that is nearly three decades old.

Of course, I’m talking about the beloved flip phone, commonly referred to in Japanese as garake (ガラケー). First introduced in 1993, they were the envy of the cell phone world until modern smartphones came on the scene. I used to have one of these, a boxy model with a spring-loaded action that made me feel like Captain Kirk telling Scotty to beam me up each time I used it. Now all I have in my pocket is a supercomputer with instant access to the world’s electronic resources. Boring.

I recently discovered that I was not alone in this sentiment when I read an article in the Asahi Shimbun about a cell network outage at NTT Docomo, one of the big communications providers in Japan. The nationwide failure, which began on the evening of October 14, impacted all of Docomo’s customers. Most users had service restored by the following morning. But some customers, those still using 3G services, endured a full twenty-nine hours without cell access.

3G technology was in the news recently thanks to announcements by the big US carriers that they would end such services throughout 2022. Such systems went online close to twenty years ago, but they have been supplanted by more advanced 4G and now 5G networks. I like to imagine that the only person still using 3G is a regional sales manager in Cincinnati who keeps that old phone turned on “just for emergencies.” It hasn’t rung in seven years.

But Ned, that sales guy, isn’t the only one. There are still millions of 3G users in America, including convicted felons with 3G-enabled ankle monitors. Use of the older spectrum in Japan is just as pervasive. According to that Asahi article:

That is, as of June 2021, there were still contracts in place for more than fourteen million 3G devices! The article wasn’t clear as to whether that was just on Docomo’s network or across all carriers. But in either case, it’s still a crazy number of people reliving their Star Trek memories.

Flip phones are making a comeback of sorts, thanks to the introduction of foldable-screen devices by Samsung and others. While those products are full Android smartphones with the latest tech, you can still purchase a traditional “feature phone” with flip-out action. Docomo offers three such devices on its web site for new cell phone contracts. Some of these phones even include over-the-air TV reception, so you never have to miss out on sumo tournament broadcasts. I want!