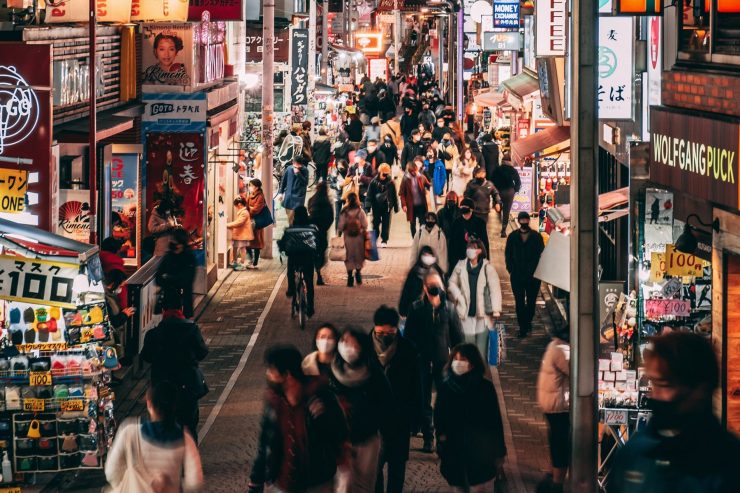 Last week, I had to chase some juvenile ruffians out of our neighborhood park. It’s your typical local Japanese open space, complete with playground equipment set to 1950s safety standards, a large, flat surface for noisy bouncing balls, and not a speck of grass to be seen anywhere. The five youths in question were around age twenty, and when I finally approached them at 2:30 in the morning, they were completely surprised that anyone—especially those sleeping within ten feet of the park—would be bothered by their loud shouting and laughing.

The younger generation in Japan are generally polite, especially to elders. That’s why I was surprised to hear one of the males of the species quip sotto voce as I started to leave, “YOUは何しに日本へ,” roughly translated as, “Hey foreigner, why did you come to Japan?” The phrase happens to be the title of a popular television program, and I’m sure the speaker didn’t mean anything rude by it. I am also sure that he and his friends had no intention of causing daily COVID infection numbers to spike six-fold in just the past month. But they did.

If you have been keeping an eye on the pandemic situation in Japan during the Olympics, you know that it went from around 1,600 daily infections at the end of June to nearly 10,000 per day by the end of July. Although the nation has had a few COVID waves in the last year and a half, they never rose very high (compared to those in Western nations) and they dissipated soon after calls for vigilance among the populace went out.

This time is different, both in how sudden the wave formed and in how steep its rise has been. It doesn’t take an epidemiologist to know the key differentiator: the Delta variant, an aggressively infectious version of the coronavirus. In prior waves, transmission from infected individuals was a concern, but the circumstances were such that if everyone was just a little bit more careful in how they interacted, the daily infection numbers would go back to levels that didn’t put medical centers on constant alert. But with the reckless way in which the Delta variant multiplies and moves among the population, actions that seem relatively harmless—such as those five youths laughing and whooping it up near my home in the middle of the night—now come with an increased level of danger.

Unfortunately, not everyone got the message. Perhaps driven by excitement over the Olympic games, some in Japan have thrown caution to the wind and started gathering together in increasing numbers across the Tokyo metropolis and elsewhere. Even when the government requested that bars shut down by 8pm each night, some revelers took their raucous behavior and their beer bottles onto nearby sidewalks, by the hundreds in places like Shinjuku and Shibuya. Those who exchanged their masks for karaoke battles perhaps thought the old pre-Delta rules applied, where risky behavior would have limited impact. Yet another extension of the State of Emergency says otherwise.

When will the numbers start heading back down to “normal” levels? At this moment, things don’t look good, especially with several prefectures hitting new infection records each day, and some researchers warning of 20,000-plus nationwide cases per day in the coming weeks. As long as the unvaccinated gather together in poor social-distancing situations, there is not much hope for tempering the dramatic rise in cases. For its part, the government is extremely concerned, announcing just days ago that those with moderate symptoms can no longer seek care in hospitals, an attempt to make space for those with the severest of symptoms.

There are, however, pockets of good news. The vaccine rollout continues at a pace well beyond Prime Minister Suga’s stated goal of one million shots per day. Kōno Tarō, the official in charge of Japan’s COVID-19 response, said on his YouTube channel over the weekend that combined public and private injection sites are achieving 1.4 to 1.6 million vaccinations per day. As of August 4, just about 45% of the nation already has one shot; around 87% of those over 65 have that first dose. Kōno hoped to reach 80% of the general public with at least one shot within 70 days.

Another good sign is the “Olympic bubble.” There was much concern that an international gathering of tens of thousands from nearly every country on earth would be dangerous not only for spreading the virus across the globe, but also for introducing additional variants here in Japan. While it is too early to know for sure, initial reports indicate that the tactics to separate the public from those visiting for the games is working. Additionally, Tokyo Governor Koike Yuriko said in a recent news conference that interest in the games is keeping more people at home and glued to their televisions, reducing the number of people who may spread the virus in public.

Are these positives enough to thwart the current wave of infections. Probably not this week, and who can say what will happen next week. But I am starting to have a bit of hope if only people will continue getting vaccinated, if they will refrain from carousing in large groups, and if they will keep out of neighborhood parks when I am trying to get my beauty sleep.