When Will Japan Achieve Herd Immunity? 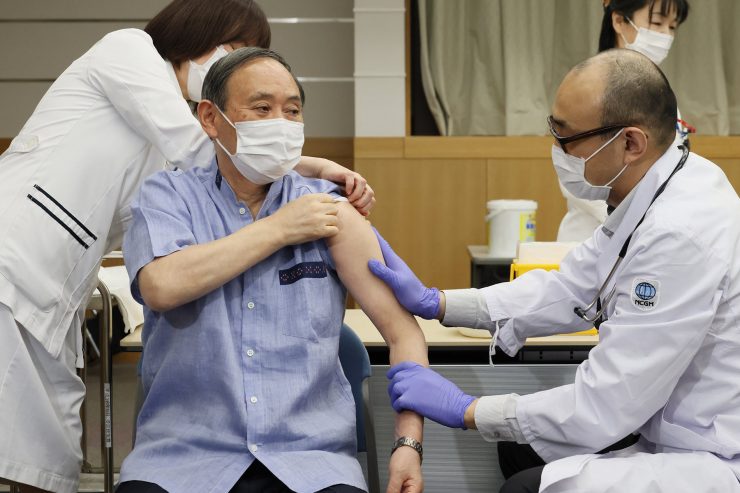 One month after Prime Minister Suga Yoshihide set a goal of one million COVID-19 vaccine injections per day, Japan still shows lackluster success at inoculating the general public. One success of sorts came last Friday, when data showed that 99.7% of medical professionals had received at least one dose of the Pfizer vaccine. Despite completing that first round for doctors and nurses, only around fifteen percent of those sixty-five and older—the only other group currently receiving the jabs—has had at least one injection.

Many in Japan are wondering when they will get their own shots. But a related and equally important question is, “When will the nation achieve herd immunity?” As I am sure you have heard repeatedly, herd immunity is the point at which a pandemic-stifling level of disease immunity—through vaccination or prior infection—is reached within a population. Once this threshold is achieved, unprotected individuals might still catch the disease, but those isolated events won’t be enough to trigger a nationwide wave of infections (assuming the virus doesn’t mutate into something that the current vaccines can’t handle).

The ever-changing nature of the coronavirus makes it difficult to state an exact date on which Japan will reach herd immunity, but we can get pretty close by making a few assumptions and doing a bit of everyday math. For that, we need some important numbers, starting with the percent of the population that must be immune for herd protection. On that, there is little agreement. One geeky article I read suggested that vaccinating forty to sixty percent of the population would be sufficient, given the documented transmissibility of the disease. This seems reasonable in light of the recent dramatic drop in infections in the United States, where about half the population has received its first dose. The New York Times would beg to differ, insisting that the boundary is now eighty percent of the population, thanks to the new variants that have come out of Britain and India.

Let’s compromise and say that herd immunity will be achieved when seventy percent of all residents are protected. While true protection doesn’t come until an individual receives both courses of the vaccine, for this analysis I will treat the date of the first injection as the date of protection. I will also assume that those who already contracted COVID-19 will nonetheless need the vaccine.

Japan’s official population as of May 1, 2021, is 125,360,000, and seventy percent of this number is 87,752,000. According to the official counts on the Prime Minister’s vaccine-tracking web page, a total of 11,647,687 residents have received their first dose as of June 3, 2021, just over thirteen percent of the total needed for herd immunity. On that same day, the nation saw a rolling seven-day average of 532,748 injections per day. Right now, most of those are first-jab encounters. But soon, daily injections should balance out between the first and second doses.

Assuming half of all shots going forward are first-dose shots, it will take 286 days to reach the seventy-percent threshold, if the current rate of just over half-a-million shots per day remains constant. At this speed, herd immunity would be achieved on March 15, 2022, just over nine months from now. If Prime Minister Suga’s desire for a million shots per day magically manifested on June 4, it would take 153 days for herd immunity to be achieved, which lands on November 3, 2021, about five months from now.

If we wave a magic wand and set the herd-immunity boundary at fifty percent of the population, the numbers improve quite a bit. Under this scenario, only 62,680,000 residents would need vaccines, or 51,032,313 individuals beyond present counts. At the current daily jab rate, this lower boundary could be achieved in 192 days (December 21, 2021). Under the million-a-day scenario, it would take just 102 days, falling on September 13, 2021. That is just three months from now. While it wouldn’t offer full protection to the entire population, reaching this boundary would hopefully produce outcomes similar to those currently enjoyed by those in the United States, Israel, and other locales with high vaccination rates.

Can we get to fifty percent in three months? While I am doubtful, we are on the way there. One million jabs per day is almost double the current rate, a daunting goal. Still, the nation did move up from around 165,000 shots per day just before the Golden Week holiday in early May, a tripling of the pace in around five weeks. The government announces new ways to get needles into arms almost every week, and vaccine supplies are no longer a significant bottleneck.

If Japan is able to overcome some bureaucratic hurdles and free up more resources to deliver inoculations, it might vaccinate the first half of the nation in just over three months. Is that in time for the Olympics? Absolutely not. But it might be enough time to the country stave off several more waves of infection.