The Many Political Parties of Japan 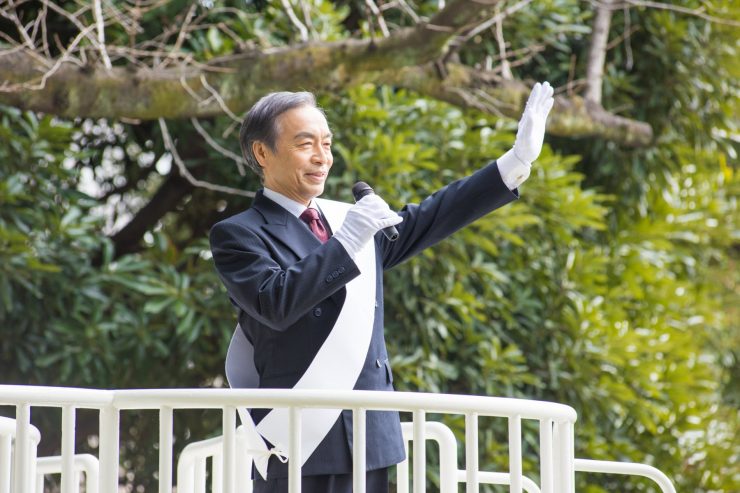 Today I am going to introduce you to the major political parties in Japan. Don’t get too excited; as is the case with other countries, there is little to party about in Japanese politics. Also, politicians here seem much more sedate than their American counterparts. And yet, with the way that political parties in Japan pop into and out of existence, you would think that there was some factory pumping out new ones on a weekly basis.

Japan employs a parliamentary system, similar to that of England and other countries that have a history of monarchy. Japan still has an emperor, but the functions of government are managed by the executive Cabinet (), formed and headed by the Prime Minister, who in turn is selected by the Diet (), Japan’s bicameral legislature. Judicial appointments are made by the Cabinet. All of this means that the legislative branch holds a lot of power, and those political parties that hold a majority within that body have significant control.

Political parties bring together like-minded politicians under a group moniker. But as you can expect, finding enough like-minded politicos can be difficult, which leads to a proliferation of smaller parties, some that last only a handful of years. A few of these parties even employ the names of older, defunct groups, although not necessarily their core policies. It’s all very confusing to an American like me who rarely thinks of any party that doesn’t involve an elephant or donkey.

The largest political party in Japan is Jimintō, the Liberal Democratic Party (LDP, , an abbreviation of ). Formed in 1955, this conservative group has dominated the legislature nearly every year since it came into being. It espouses right-of-center fiscal and social policies, albeit in ways that might be considered centrist by the standards of America’s GOP.

In Jimintō’s current leadership role, it is joined by Kōmeitō (NKP, ), also center-right, and affiliated with the Buddhist religious sect Soka Gakkai (創価学会). As such, it takes a pacifist stance on military issues, yet still allies itself with the more hawkish LDP. It seeks to eliminate nuclear weapons, and also to rein in the power and complexity of government bureaucracy.

Next comes Minshutō, the Constitutional Democratic Party of Japan (CDP, ), shortened from ), the biggest player within the opposition field (when affiliated independents are included). Plus, it is a good example of how parties in Japan are fleeting. The CDP formed in 2017 as a splinter group from the now-disbanded Democratic Party. But in late 2020, it merged with yet another group, the Democratic Party for the People (DPFP, ), which itself was started by former Democratic Party leaders who later merged with the Liberal Party, still another left-leaning group. The group, as it exists today, opposes pro-military changes to Article 9, the anti-war clause in Japan’s constitution. The CDP also pushes for renewable energy as a replacement for nuclear power.

Japan’s communist and socialist adherents are represented by the Japanese Communist Party (JCP, ), the Social Democratic Party (SDP, or just ), and the Okinawa Socialist Mass Party (). Communists in Japan claim to oppose the traditional Marxist rhetoric of “violent revolution,” which makes sense in a nation that values harmony. While all three of these groups are decidedly leftist and pacifist, they each have distinct policy goals: The JCP opposes American meddling in Japanese affairs, while the SDP strives for expanded social programs. The Okinawan contingent formed in the 1950s to compel the return of Okinawa to Japan from US control, a goal that was met decades ago.

The Party of Hope (の) is yet another conservative group, formed in 2017 by current Tōkyō governor Koike Yuriko. That organization merged with the Democratic Party in 2018, which itself, as you certainly recall, became part of the current CDP. But wait! Not everyone liked that idea. So, Koike and a few other Party of Hope members started a brand-new group in 2018 named—drum roll, please—Party of Hope. And here’s one more strange thing: Its views are more or less in line with the ruling LDP, and yet Party of Hope is considered an opposition party.

There are various other smaller parties, some of which don’t have any existing officeholders at the national level. One of my favorites is the Party to Protect the People from NHK (N-Koku, NHKからをる). NHK is Japan’s public broadcaster, similar to PBS in the United States. If you own a TV in Japan, the mandatory fees can cost you over US$200 per year. The N-Koku party not only wants to eliminate this fee, they want to “protect the people” from the fee!

As a foreign national living in Japan, my ability to participate in local political life is severely restricted. But with the latest news out of the legislature topping most nightly broadcasts, and with so many of my friends and neighbors interested in what the government is up to, it’s important to at least be aware of the major groups that have risen to positions of national leadership.