Japanese in the Wild: 勝手口 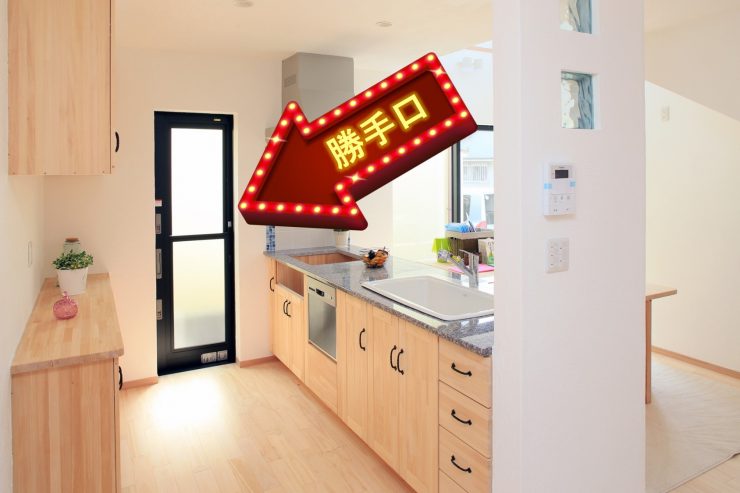 Your kitchen is the most selfish room in your home. It exists solely to meet your personal needs. Naturally, some effort is required on your part; you need to wash the dishes instead of just throwing them out every time you eat—thank you, environmentalists. But the real focus is on you. The room even has a large machine (with a built-in light bulb!) that keeps a ready supply of fresh foods handy anytime you want to tickle your taste buds.

One traditional Japanese name for the kitchen leaves no doubt as to its selfish nature: okatte (お勝手). The core of this term is 勝手, often translated as “selfish,” “willful,” or “arbitrary,” with the feeling of getting one’s own way. For example, the sentence 「では、なはされない」 translates to, “When in a group setting, don’t do things in your own [selfish] way.”

There are various ideas as to why the kitchen was called お勝手, many of them focused on that room’s function as the financial center of the home during Japan’s Edo era. One theory posits that when vendors would come to a home to sell their wares or foodstuffs, the transaction would be handled in the standard management office for the home—the kitchen. Since money sometimes implies greed or other selfish intent, the place where the money changed hands came to be called the “selfish room.”

These days, the Japanese kitchen is more commonly referred to as daidokoro (台所) or even by the English-sounding kicchin (キッチン). But the older term lives on via the word katteguchi (勝手口), the “selfish door.” Those Edo-era tradesmen would not carry their products in through a family’s front door, but would instead use a separate door set aside for such business, one with immediate access to the kitchen. These days, many Japanese homes still include a small kitchen door that leads directly outside, a convenient way to access trash bins or the occasional tradesman.

Despite its archaic roots, 勝手 has found its way into modern expressions. In a world of cell phones with official apps and app stores, katte apuri (勝手アプリ) identifies any side-load app or other tool installed outside of the device’s standards. A parallel term, katte saito (勝手サイト), refers to an unofficial web site that is frowned upon by an Internet Service Provider. Both of these terms held more sway back in the days of flip phones.

These terms might be a bit dated, but go ahead and try them out. I doubt anyone will think you are being willful or arbitrary for doing so.