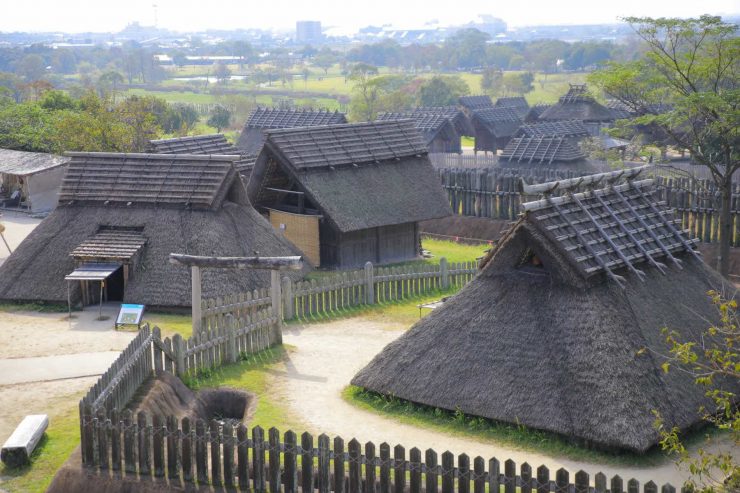 A long time ago, on an island nation far, far away, there lived a hunter-gatherer civilization known as the Jōmon (縄文). Well, it was not really that far away since it happened right here on the Japan archipelago. And it was not an island nation either, being still connected to Asia at the time by a land bridge. But it was truly a long time ago, between 14,000 BC and 1,000 BC, though some say these peoples remained up through the fourth century BC.

The Jōmon inhabitants were actually multiple distinct groups that came over to Japan in two or three primary waves, migrating from Central and East Asia. Thanks to the relative stability of Japan’s western coast—both in terms of weather and separation from mainland aggressors—the Jōmon lived a “sedentary” existence, free from the need to constantly migrate for food. They survived by hunting and fishing, and had plenty of time to craft earthenware pots patterned with knotted cords.

While the peoples who lived here during the Jōmon Period (縄文時代,  Jōmon jidai) are not the ancestors of modern Japanese, their impact remains. Some researchers believe that their religious practices influenced what was to become Shinto. Also, the Jōmon developed lacquerware, forms of which are still crafted in Japan today.

These days, you can still see how the Jōmon lived by touring 三内丸山遺跡 (Sannai Maruyama Iseki), a reconstruction of a Jōmon village in present-day Aomori Prefecture. I visited there a few years ago and was amazed at both the communal pit-houses and the tall wooden lookout tower. It is said that up to 500 people may have lived at once in the original village.

The Jōmon eventually died out, giving way to subsequent arrivals that would become the modern Japanese peoples. But while they are no more, the indigenous Jōmon played an important role in Japan’s early formation.