Riding Up and Down Japanese Highways 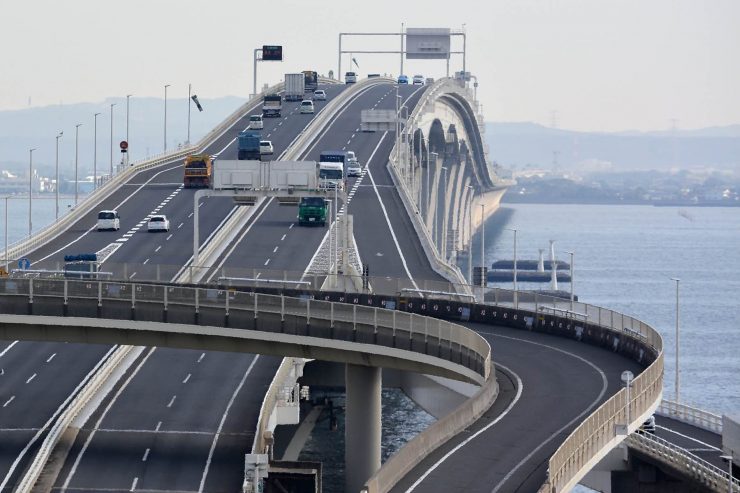 Today is tōji (), the winter solstice and the official start of the winter season. Despite that strict demarcation on the calendar, eastern Japan got an early start this year on a record-setting snow season. A recent NHK news report covered the impacts that blizzard-like conditions have had on transportation, including on the Kan-Etsu Expressway () that links Tōkyō with Niigata Prefecture. The online text summarized the dire situation as follows.

This text roughly translates to, “According to the East Nippon Expressway Company, the traffic jam in the outbound lanes was cleared as of 6:00am on December 18, but the blockage continued in the inbound lanes.” It’s good news for half of the travelers on that highway. But as for the cars still stuck in the “inbound” direction, where were they headed?

The general answer is, “toward Tōkyō.” In the Japanese transportation system, “up” (nobori, 上り) and “down” (kudari, 下り) indicate the direction of travel, similar to how terms like “northbound” and “southbound” are used in the United States. The high point of a route, the “up” location, designates the official starting point for the highway or rail path. For the majority of national roads and train lines, Tōkyō is that starting point, and all “inbound” (り) trains and vehicles head toward the capital. Travelers moving away from the Tōkyō origin toward each route’s terminus are considered “outbound” (り).

In America, where I was raised, “up” and “down” typically refer to the north and south compass points. It would not be surprising to hear someone say, “I went up to Seattle on business,” or, “Our family went down to Orlando for our last vacation.” Nobody would ever say they were going “up to Denver” from some tiny hamlet in South Dakota, even though the trip would lift them close to 4,000 feet in elevation toward a larger city. The general southerly movement would invoke “down” as the natural directional.

In Japan, however, “up” indicates the starting focus, or historically, the most important endpoint. Before the Meiji Restoration in the late nineteenth century, Kyōto played that central role. But these days, all roads lead to Tōkyō, literally. A key exception occurs in Okinawa, where 上り typically indicates Naha, the prefectural capital. Also, for any local route that doesn’t involve the Tōkyō -metro area, 上り and下りwill be based on the starting and ending points established by the managing jurisdiction.

My neighbor used to live in the Kanai region, close to Kyōto. I asked him how those in that area deal with the switch of 上り to Tōkyō. He said that even in Kyōto, residents today use 上り for Tōkyō -directed travel. The key is where the Emperor resides. With the restoration of imperial Japan in 1867 and the associated transfer of power from the shōgun to the emperor, the definition of “up” moved as well.

This up-down language also works for other situations that involve movement between a core location and a separate remote site. For instance, in a computer network, data that flows from a user’s terminal to the central server is moving 上り, while downloads from a central computer to the local user are 下り.

As you venture out this holiday season—wearing your mask, of course—be sure to know your up from your down before heading to your destination. You don’t want to get stuck in a blizzard.