Keeping Whipped Cream and Wasabi Out of Your Coffee 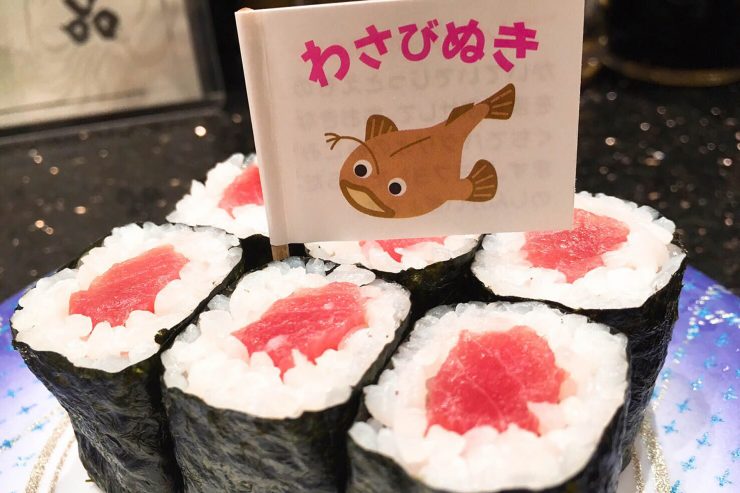 You are probably wondering how I’ve managed to stay well under 200 pounds (91 kilograms) with all this pandemic stuff going around. I can assure you it hasn’t been easy. But one thing that helps is to exclude a portion of each thing you eat. For example, when eating a large bowl of katsudon, you can save a few calories by forgoing the side of takuan pickles.

I used this tactic the other day at Doutor, one of the major coffee shops here in Japan. Currently, they have a soy-centric Kinako Tōnyū Latté (きな粉豆乳ラテ) that’s a fairly good option in a Pumpkin Spice-free country. It comes with a dollop of whipped cream on top, which has kilocalories in it. I placed my order for the hot, tall drink at the counter.

You might recognize that 抜き part at the end if you’ve ever ordered sushi for kids. Selecting sushi with a 「ワサビ抜き」 qualifier prompts the chef to leave off the wasabi. That 抜き suffix comes from the verb く. While it means “omit” in this case, it conveys the sense of scraping something off that is normally present, as with wasabi on sushi.

The sign promoting Doutor’s latté proudly displayed a generous helping of cream, so asking them to scrape it off seemed like the safest move. However, the cashier raised a questioning eyebrow and confirmed my order with the following adjustment.

Instead of asking if she should scoop off the whipped cream, presumably with her bare hands, her use of なし made the claim that the cream shouldn’t even exist at all. I got my naked latté and everything was fine. But why do you use 抜き for sushi yet なし for whipped cream?

I asked around from people who grew up speaking Japanese, and it seems that there is no specific reason why one suffix is better than the other. Technically, 抜き is correct since the shop’s standard behavior is to put whipped cream on this product. And yet, なし simply sounds more natural.

I think it sounds more natural for sushi as well, since we are asking the chef to stop short of adding wasabi instead of removing previously added horseradish. But over time, ワサビ抜き has become a single word, the suffix bound permanently to the root, literally in this case. So, when it comes to protecting kids from spicy food, ワサビ抜き is the correct usage.

From what I’ve heard, it is generally better to use なし when asking for ingredient adjustments. However, if you are worried about choosing the wrong term, consider these more formal alternatives.

Using these expressions will not only make your request clear, but it will also keep your diet on track.

I finally finished reading a book written in the Japanese language! You might not believe me, especially if you learned about my Shelf of Shame earlier this year. I have a bad habit of buying Japanese books and...

If you have been keeping an eye on the pandemic situation in Japan during the Olympics, you know that it went from around 1,600 daily infections at the end of June to nearly 10,000 per day by the end of July. Although...