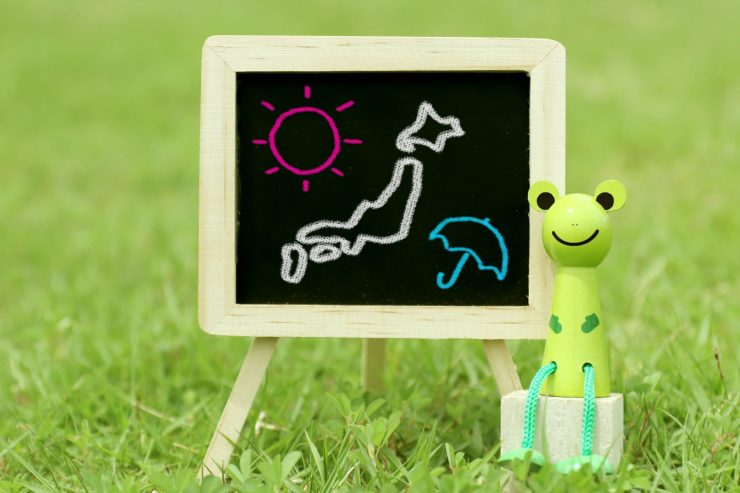 In terms of square feet, Japan is a lot smaller than my nation of origin, the United States. Yet the number of prefectures and related jurisdictions () you have to learn is on par with the number of American states, including Nebraska. Now that I live here, I really need to memorize all of the prefectures by name and location. Fortunately, there is an easier first-step that doesn’t require as much brain storage: regions ().

The various prefectures are grouped into eight geographic regions, all with names that you are likely to hear on the daily weather report. Here is a complete list, presented in traditional Japanese east-to-west order.

This eastern-most region includes just a single prefecture, the identically named Hokkaidō. It’s situated on an island that, yet again, uses that name, one whose characters translate to, “Way to the North Sea.” I’ve included a graphic of the regions and prefectures of Japan at the end of this article. In that map, Hokkaidō is the purple shape at the top.

Tōhoku encompasses the northernmost portion of Japan’s main island of Honshū, and includes six prefectures: Aomori, Akita, Iwate, Yamagata, Miyagi, and Fukushima. As with the other regions, the Tōhoku name is entirely descriptive, made up of the characters for “east” and “north.” With all the snow they get there, it’s no surprise that this region appears in a colder, darker blue in the map below.

The Kantōregion (“Connection to the East”) hosts the largest generally flat area in Japan (the Kantō Plain), and as a result, contains the nation’s largest population base. You’ll find seven prefectures in this region: Gunma, Tochigi, Ibaraki, Saitama, Tōkyō, Chiba, and Kanagawa. The Tōkyō-Yokohama metro area hugs the bay near the bottom of the teal blue section in the map below.

The name Chūbu means “Center Part,” and it’s not lying. Nestled between the Sea of Japan on the west and the Pacific Ocean on the east, this region consists of the middle-most prefectures on the main island, nine in total: Ishikawa, Toyama, Niigata, Fukui, Gifu, Nagano, Yamanashi, Aichi, and Shizuoka. It appears as green in the map below. With so many prefectures, it’s common to break this region up even further into three sub-regions.

Kansai (“Connection to the West”) is sometimes referred to as Kinki (近畿), indicating how portions of it are “Near the Capital” cities of Kyōto, Ōsaka, and Nara. The full set of prefectures is: Hyōgo, Kyōto, Shiga, Ōsaka, Nara, Mie, and Wakayama. As with Chūbu, the Kansai region touches the coasts on both sides of Honshū. It appears as the yellow-green area in the map below.

The name Chūgoku means “Middle Country,” although you might recognize the other use of this name: “China.” Unlike Chūbu, it’s not really in the center, but sits at the bottom of the main Honshū island. It appears in orange in the map below, and contains these prefectures: Yamaguchi, Shimane, Tottori, Hiroshima, and Okayama. It is sometimes split into two subregions by the mountain range that runs through the middle.

With Shikoku (“Fourth Country”), we finally escape Honshū, landing on another of Japan’s four main islands. This one contains four prefectures: Ehime, Kagawa, Kōchi, and Tokushima. In the map below, look for the brown part to find this region.

The last region takes us to the final main Japanese island, plus brings in Okinawa, which used to be a separate kingdom before it was melded into Japan. All of the remaining prefectures appear here: Nagasaki, Saga, Fukuoka, Ōita, Kumamoto, Miyazaki, Kagoshima, and Okinawa. The red portion of the map below shows these prefectures.